Who hasn’t heard of her? So many times I’d hear people say “she’s a Jezebel”. But do we even know who “she” is? And how do we combat this epidemic?

I’ve also heard that we can’t have a Jezebel without an Ahab. So, what, or who is an Ahab? And how do they work together?

Here is a detailed description of the their story, and how it relates to the family. I recommend it to get a better grasp on these two characters.

She is also discussed in the last chapter of the bible. When even a wonderful church was reprimanded that they tolerated a Jezebel spirit.

She obviously gets around as she made it to the end of the bible. But how could she? Since she was an actual person.

Well, here’s how. As God would give the “spirit of” Elijah or Moses to a prophet for a quick download. The enemy (being that he loves to copy God) will use this tactic to advance his kingdom as well.

So this spirit has been causing havoc for centuries. But why is it that everyone blames Jezebel for everything? In that most will say she needs an Ahab to exist.

(And btw Jezebels can be in a woman or a man, but to be easy on the author I will use the pronouns she for Jezebel and he for Ahab)

That is because an Ahab tends to be a weakened man. Maybe not in all areas, but in spiritual authority and discipline he isn’t taking the lead.

You can see this in about every sitcom, where the mom takes over. Now a days this is not challenged, but celebrated. 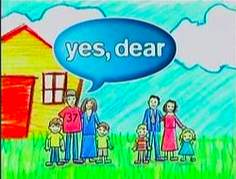 You see the reason Jezebel gained power was because Ahab wanted a field. The owner wouldn’t sell him the field. So his wife, Jezebel went and signed the kings name (her husband) and had the owner killed. In order for Ahab to be happy and get out of bed (where he had gone to sulk).

So you see, Ahab’s seek Jezebels to do their bidding for them.

Wait…why is that so bad? We are to submit to our husbands authority after all.

Simply put, this is co-dependancy. She took it upon herself to solve the problem (Though there wasn’t one, only greed).

As a wife I am supposed to submit to what the Lord sees fit. Not to a husbands greed and childish behavior.

In this meme, we can see the order of how things are supposed to be.

And what we see here is typical right?

The mother taking the child/children to church without the father. (One expert said that 80% of the homes today are Jezebel/Ahab spirits).

But here’s where it gets interesting. What if…when Christian wife takes it upon herself (and many times they don’t have a choice) to be the “Spiritual Leader of the home” they are turning the tables.

This is a role that is ordained by God to be the husband’s.

But how can that be bad, I mean someone has too…right?

But the mother has now stepped into dangerous territory. She is not holding her husband accountable. And in that she has taken charge she has aligned herself with the Jezebel spirit.

Her Ahab husband will now never know the Lord the way he is supposed to, by leading.

Oh sure maybe he’ll follow. But ultimately he’d rather watch sports, or about anything else. And shoot, why not. His wife has it covered.

A friends husband shared with me once that he was so proud of his wife for being a leader in a bible study. In that she had it covered for both of them. Sad.

And I lived it. I took over the role of spiritual leader.

But outside the home I was Ahab. Ahab wasn’t just coveting his neighbors property. But he would rather not deal with controversy.

I learned in order to keep the peace I’d put up with people that were mean and offensive. In other words, I was co-dependent. Wanting their approval over God’s.

Growing up I was taught that my opinion didn’t matter. That everything was my fault. So, I’d rather apologize quickly so we can all play nice in the sandbox. And not deal with anyone else’s behavior but my own. Just like how I was raised.

This worked well as coping skills to get through an abusive childhood. But in the long run I seem to keep collecting people that are more about controlling me than being life affirming.

They’d be nice in the beginning, too nice. But ultimately when I didn’t pay them back in the manner in which they felt I owed them, or start to call them on their stuff it would get interesting. I’ve been through four just this year.

But I am done. I am done with those that ultimately want to control my time and energies. Oh I’ll be polite…but I know their schemes now.

In the world they call these people narcissists. If they only knew the reason they don’t change is because these spirits (and mostly with Leviathan…which is another blog post coming soon) aren’t dealt with the behavior continues.

I am now in counseling to combat these spirits. I have been in therapy off and on since 1982. You see when you go through the things I have gone through, it’s impossible to not go through unscathed. As these spirits come in with trauma. And they stay with us till we throw them out. And it’s time.

And what does this do to children? I mean, they get introduced to Jesus. The bible is read in the home. Who cares if the women is the spiritual leader…it gets the job done after all. So…what’s the harm?

Well, thanks for asking.

Oh sure Emily, another factor, theory “reason” for this onslaught of gender confusion. I get it, I go down a lot of rabbit holes. So let me explain.

When women are fulfilling the man’s role, the child is naturally going to learn the opposite of what God intended. A counterfeit family. A mockery of how God intends it to be.

Plus then the children will be raised with these spirits, and adopt them with the modeling they see.

And our family is a perfect example of how this did not work. I live with the consequences every day.

But the good news is, as of this date our marriage is going from the Poseidon (A ship that capsized…in the movies) to being turned upright by a merciful God. We still have a long way to go. But the jist is these spirits come upon us from trauma. And we make oaths to try and get through this trauma, but guess what…oaths with the enemy invite them in. Here’s a perfect example.

After being spoiled (It’s not just trauma, but when children are never disciplined by the father a Jezebel spirit thrives as they always get their way) Scarlet didn’t know how to deal with trauma. So instead of asking our creator for help, she vowed to lie, cheat, steal and even kill. (Jezebel is a spirit of murder, after all she killed 450 prophets).

Not only did she make this oath to do whatever it takes…she cursed her future generations to do the same. Plus…how can we forget she was hooked on Ashly. A def Ahab. (Finally that attraction is explained)

If you’d like to know more here is a stellar video on this subject. As I just wanted to wet your appetite so you could go out and search more about Jezebel/Ahab. They have done so much damage to the family.

It’s time we stand up to these spirits and if you have them to start confessing them. And to learn about holiness. If not for us..for our children who are suffering and acting out because of our tolerating these spirits.

How do we do that? It comes down to forgiving those that hurt us and repenting from our own actions as we can’t blame these spirits. But we do need to be free from their influence to lead more Godly lives.

Here is one ministry that can help. http://www.restoredtofreedom.com

Blessings onto you. There is so much more to this story…so hopefully you will want to know more.

Bringing pieces of heaven to earth